We have 17 guests and no members online

Construction: The dark chocolate brown wrapper was slightly mottled with almost invisible seams and finished off nicely with a tidy double cap. The pack was textbook firm and consistent along its length. Tobacco on the foot looked very tight and the different tobaccos in the blend were easily discernible by their colour. Overall like most nubs I’ve experienced, this cigar was exceptionally well made.

Smell: Smell on the wrapper consisted of chocolate over cedar with hints of coffee and hay. On the foot the bouquet was made up of primarily hay with hints of sweet coffee.

Cold Draw: Resistance of the draw was perfect, not loose, but a little resistance. Flavours experienced on the cold draw comprised of aged tobacco, espresso, cedar, hay along with a gentle cedar tasting spice.

Aroma: This cigar emitted a delicious aroma which consisted predominantly of chocolate and cedar.

Very soon after the charred flavours of the first light, the cigar settled down and offered a classier synergy between the flavours. All the bitterness and char waned. The chocolate flavour evolved into dark,sweeter eating chocolate, whilst the coffee flavour shifted to a robust dark roast smoothness.  The cedar lingered and remained unchanged. The finish was predominantly of coffee and cedar with the addition of a very subtle earth undertone.

The smoke production was excellent; producing thick clouds of dense white smoke. The existing flavour profile consisting of these big flavours had the cigar sitting on a notch over medium.

The burn started off a little rocky from the first light, running down one side. Fortunately it stopped 10mm down and started to burn around at the 12 minute mark. 20 minutes in the cigar started to exhibit a near perfect burn.

Flavours in the second third did not deviate from the flavours experienced in the first. The overall strength of the cigar at the end of the first third had ramped up from just over medium, to just shy of full. This is a very robust and rich flavoured cigar but does not bring with it a palate searing spice offered by excess nicotine or young tobaccos.

Worthy of noting is that this cigar flavour incited changes whenashing. When you ash a cigar the ‘cherry’ becomes exposed to an richer source of oxygen, therefore burning hotter. When this stick was ashed the flavours regained some of their bitterness and the cedar moved closer to the front of the palate. This was temporary of course, as once a few millimetres  of ash redeveloped and smothered the cherry again the flavours smoothed back out to their previous state. In addition to the change in flavour created by removing ash, the burn tended to go wild for a few minutes until a layer of ash formed which seemed to keep the burn under control.

Late in the second third the cigars burn started to become offensive; running down one side about 25mm. I was about to touch it up when the poor burn started to correct itself.

Flavours in the final third saw a slight change with the sweet chocolate moving further ; allowing the coffee to move to the front. The coffee transitioned out of its smoothness into a sharper but thinner espresso taste. The overall body of the cigar had shifter further up into a fuller flavour  The cedar was barely identifiable and was replaced with a more toasty savor.

On the checkered flag the cigar seemed to regain the bitter tones experienced in the first light, which signalled ’the end is nigh’. 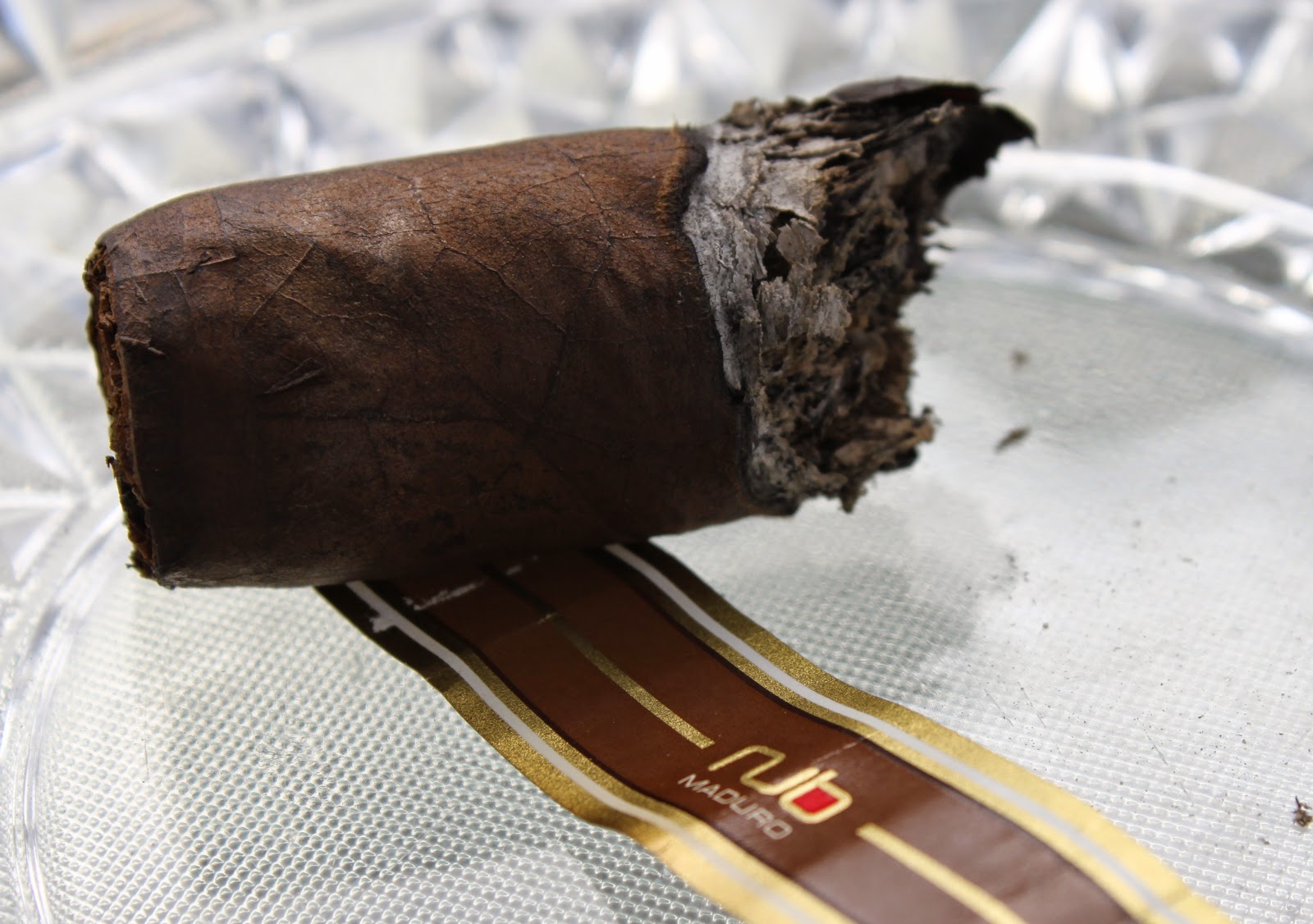 I elected to retire the cigar at 1 hour 9 mins as the acridity of heat was rearing its ugly head.

Overall this cigar was a full strength mocha bomb, exhibiting for the best part, very robust flavours of coffee, dark chocolate and earth. The construction was impeccable as was both the draw and smoke production. The only drawback was the cigars burn, which I have noticed is quite typical of the large gauge NUB cigars.

I would happily smoke many more of these, as I have already.

Suggested pairings with this stick is a heavily wooded cask strength whisky such as Aberlour A’Bundah, or Glenfarclas 105. If you like a wine with your cigars this stick would also pair brilliantly with a robust dark fruited, semi sweet Shiraz with a low tannin level.