We have 114 guests and no members online

Blend: 5-year-old, cedar-aged Colombian, Dominican, and Honduran tobacco lies beneath the cigar’s Nicaraguan binder and black Costa Rican Maduro wrapper. All the tobaccos are supposedly bale aged in cedar prior to construction.

Size: Gordo; Marketed as a 6x60 but it is not, the length is accurate however the girth is more of a 57-58g

Construction: It’s a consistently firm pack with no lumps or soft spots. There are very pronounced veins with a thin slightly oily dry smooth wrapper.  Even though the wrapper is thin it has visible seams and this is as a result of inconsistent coloration of the wrapper.  I find this gives the stick a rustic appearance on top of its refined look.

Smell: Sweet grass with hints of manure on the wrapper.

Foot: Tobacco and more sweetness. Spice on the nostrils after excessive sniffing.

Cold draw: Started with a single Punch hole, which was inadequate. Went to a triple punch and the draw opened up slightly, but is very firm. On the draw I could taste what I would describe as roasted cacao power and burnt coffee. 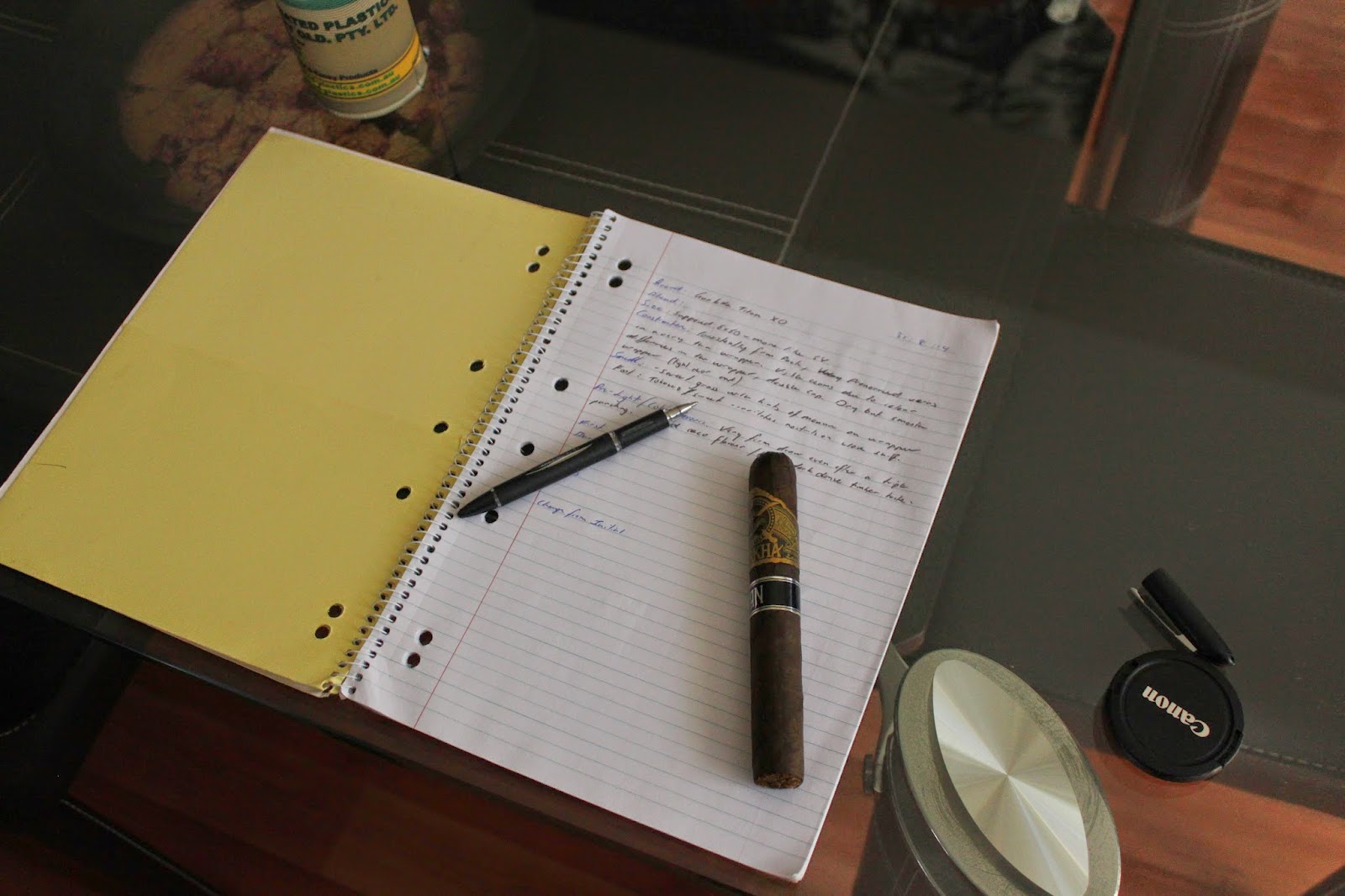 There was a very mellow but dense timber taste, similar to the tannin taste of an Australian bush timber; Sawmill came to mind. </p>

Initial Light:  The light was time consuming due to the firm draw; care had to be taken not to singe the wrapper.  Very light body with Toasty coffee/ mocha flavor, smoke was very dry but there was a lot of it. Slight bitter espresso was also present.

First third: 20min - Body from the initial light appreciated from light to light-medium

After the cigar warmed up, the draw opened up to a textbook level of resistance. Flavors developed into soft, toasty, sweet coffee and dry grass. The smoke moistened up, became thicker and developed into a nice creamy, luxurious smoke that you could almost chew. The burn was perfect with no more than 1mm of variance.

The ash was bumped off at 25mm and took some effort to remove; I would think the stick would easily hold onto another 10mm of ash before I was worried about having it in my lap. 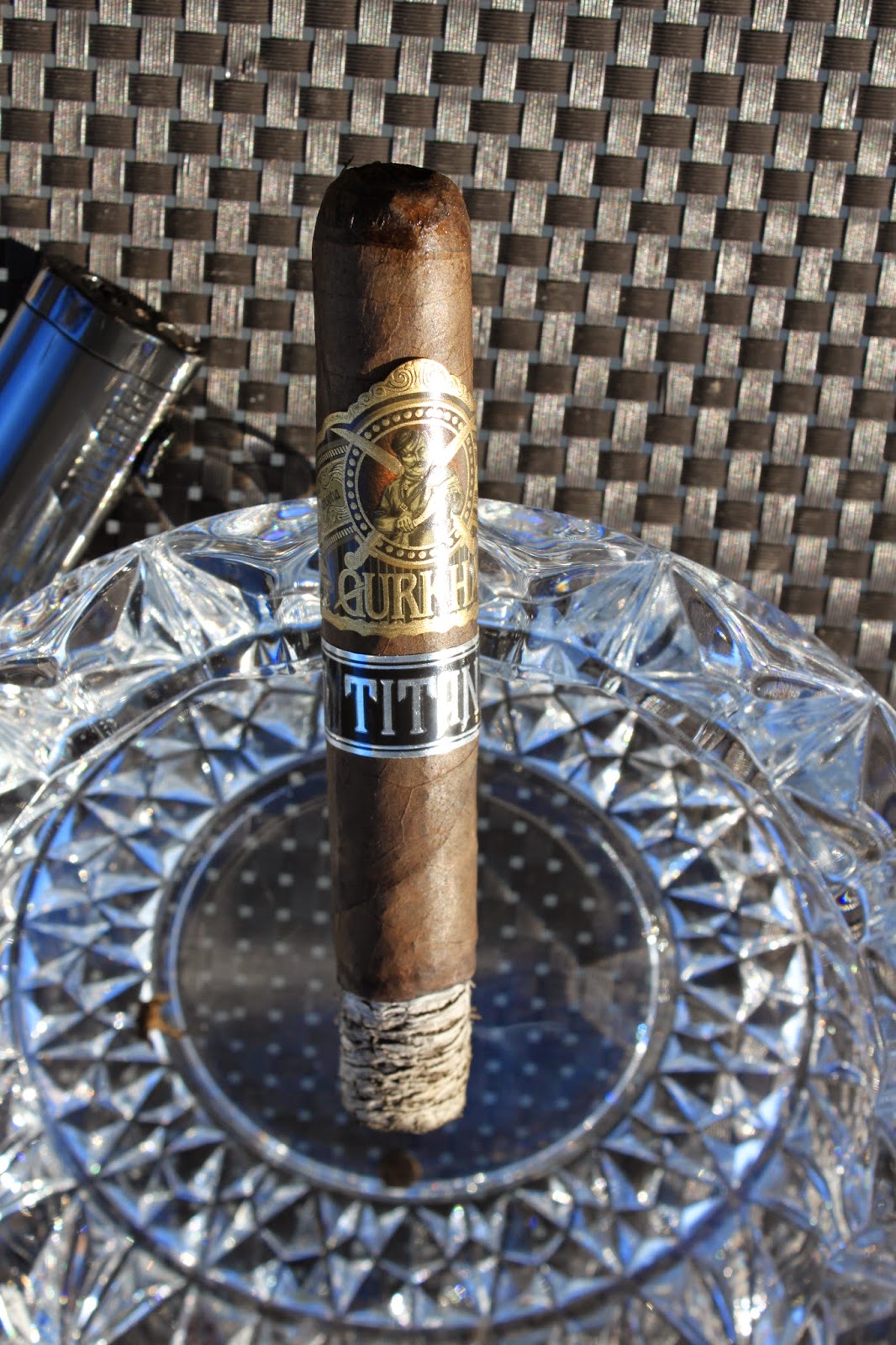 The segregation between flavors increased which made them easier to identify; toast, coffee, cacao powder and dry grass.  At this point a new flavor introduced itself.  A salty taste added to the palate; not unpleasant at all, in fact it seemed to make me hungry as though I had tasted something appetizing. As the second third of the burn developed things started to get messy; I accredit this to the wind and found rotating the cigar into the wind fixed any issues.  The toast of the cigar decreased and the salt increased as I approached the last third.   The draw was slightly increasing in resistance. 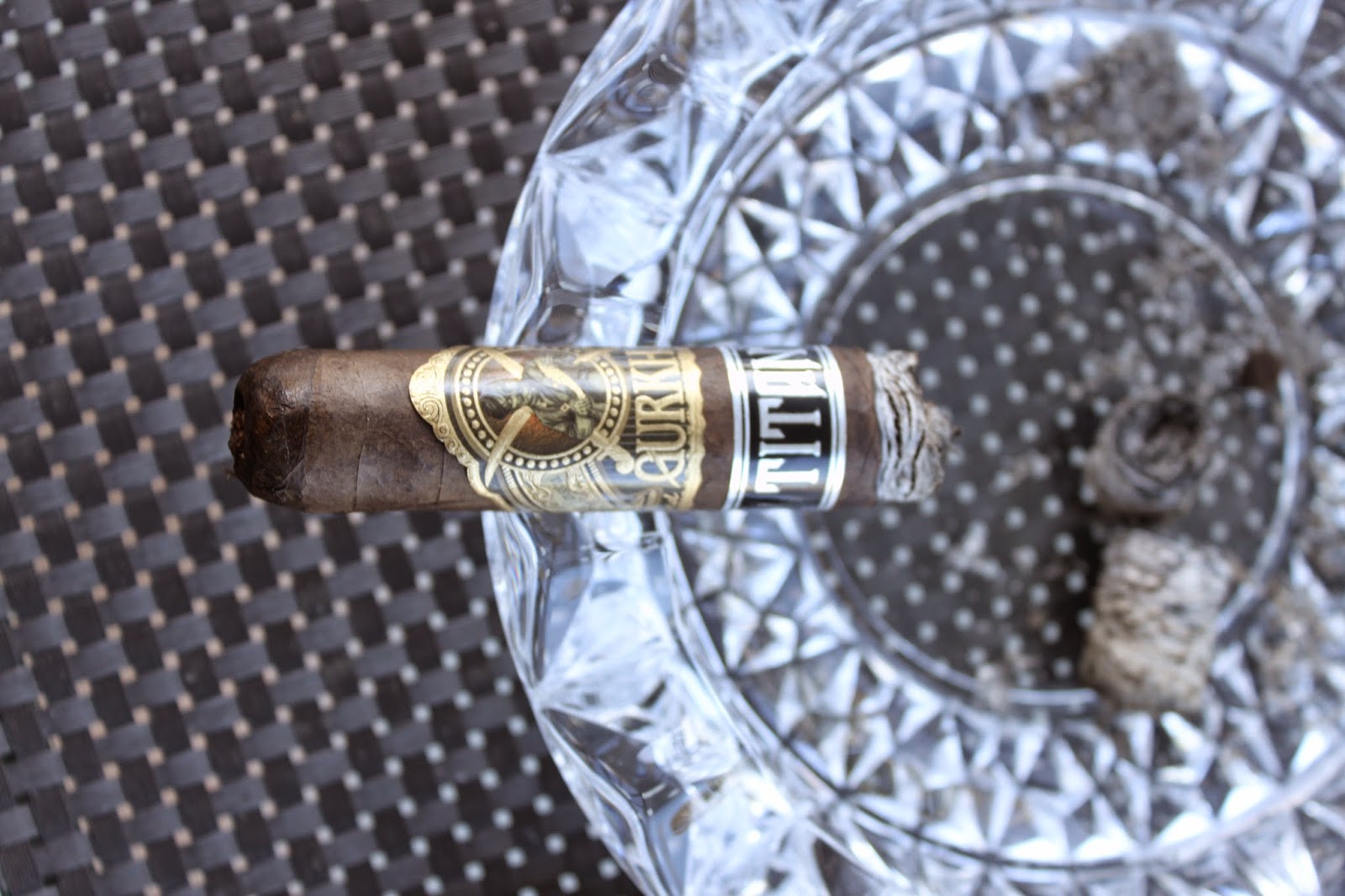 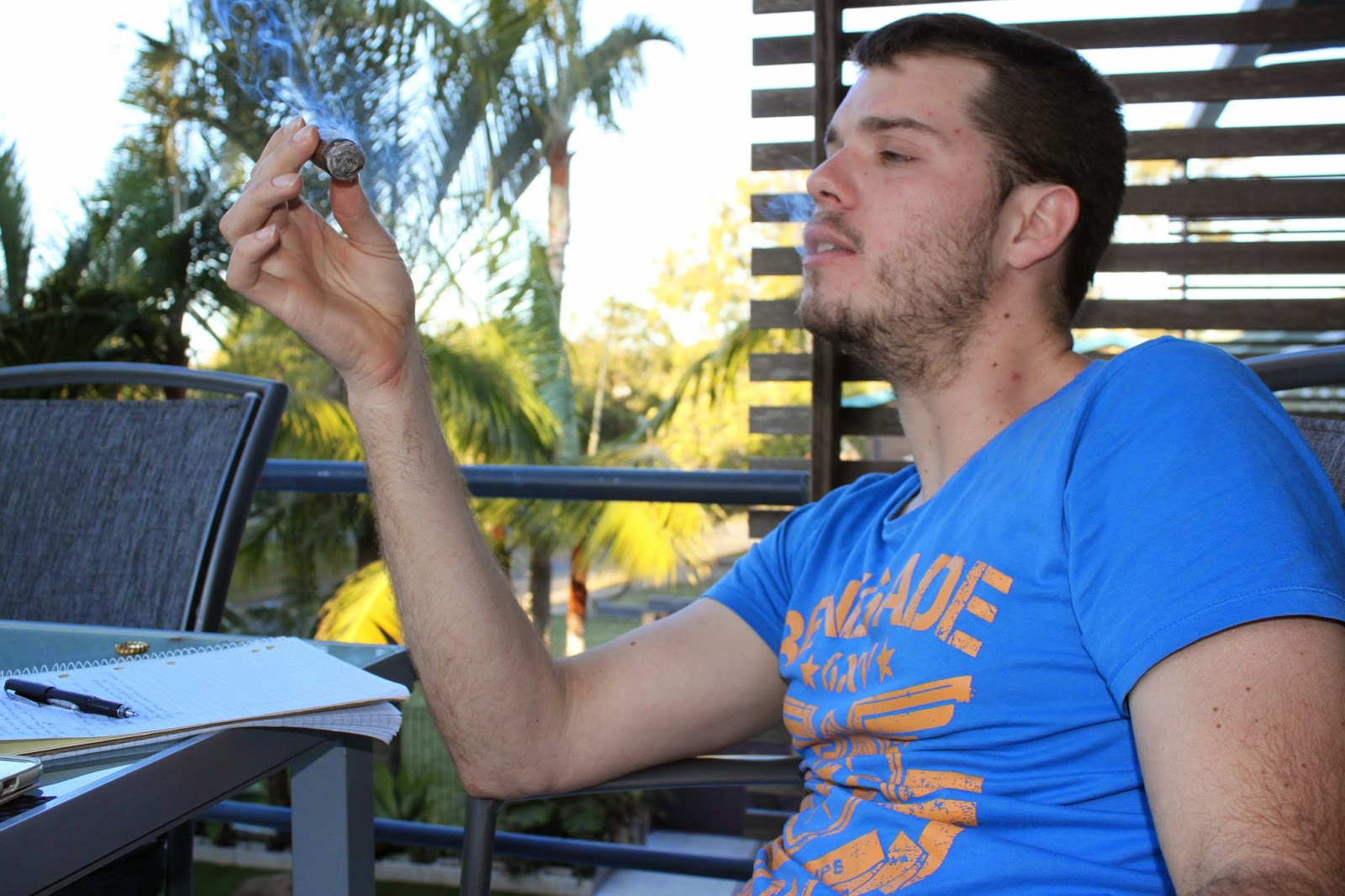 The burn rate started to slow down as per usual with these larger sticks.  The body moved into Med-Full with flavor segregation increasing and the coffee cacao taste shifting into bitter espresso with toast and ever increasing salt and grass.   The smoke began losing its creamy texture and started to get drier, in turn drying out my mouth, even with a nice wet lager.  As the main band was being approached the first inklings of heat were rearing their head. The retrohale got unpleasant as this slight heat coupled with the dry smoke and it felt quite serrated in my sinus.    As the last third closed in on its end, the salt and the heat increased and it was becoming evident that I would have to retire the stick very soon. The appreciable flavors were being overwhelmed by the heat. 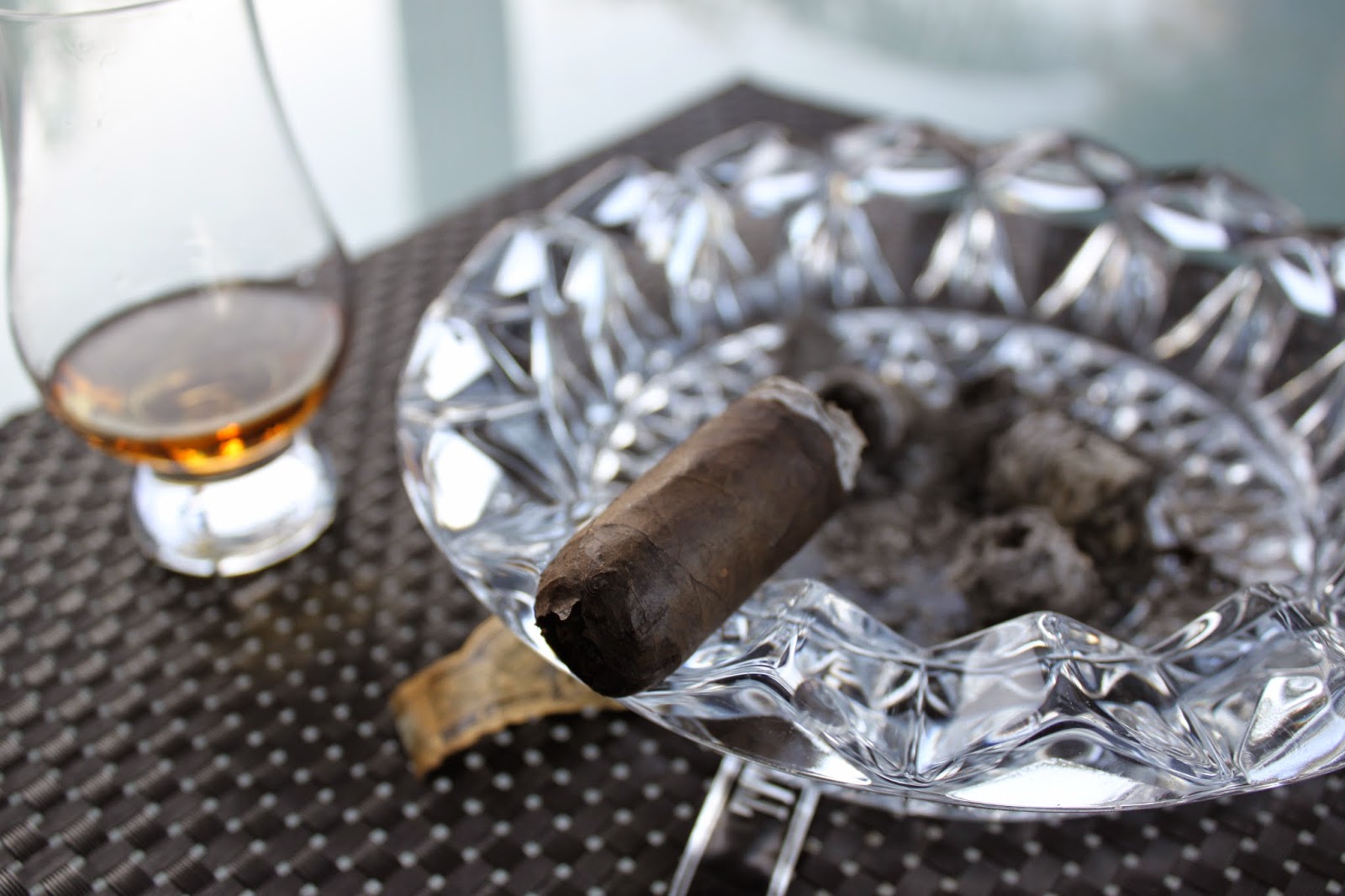 I put the stick down with 40mm left, going any further would start to detract from the enjoyable experience the stick previously offered.

The stick from start to finish exhibited a very good burn. I believe in this case environment factors contributed to the wonky burn at times.

Overall this is a great stick; I enjoyed it so much I just bought a box of 20. That being said I would recommend it to someone who likes Med body cigars with no spice.  Would go well with a light Whisky like Chivas 18 or Aberlour 10.