We have 20 guests and no members online

Construction: This tight and consistently packed cigar was wrapped in a mottled milk chocolate coloured oily wrapper, with insignificant but visible veins and seams. There was some slight wrapper damage on the foot from the removal of the cedar liner.

Smell: Bouquet on the wrapper was very light, it consisted of cedar from the liner, grass and very sweet butter with traces of tobacco; the foot consisted primarily of dried grass and butter.

Cold draw: After taking a small cut off the head I was offered a brilliant level of resistance on the draw, considering this is an ever problematic torpedo/ belicoso shape, I was surprised. Flavours on the cold draw consisted primarily of sweet dried grass with hints of butter or oil.

First Light: Flavours on the first light consisted of toast, butter, sweet green grass with a very smooth and slight white pepper spice. The general character of this stick was smooth creamy and quite mild. Smoke production was brilliant, offering plumes of thick slightly oily and moist smoke.

Aroma: The aroma coming of this cigar was very bready with the slightest hints of mould, not overly pleasant to be smelling.

Flavours in the first third were much the same as those experienced on the first light while developing a mellower synergy with each other. The cigar was getting creamier and the smoke slightly thickening. The cigar developed a pleasant spicy, creamy finish with a gentle dash of butter. The body seemed to settle a notch shy of medium after warming up. The burn was a little messy at times but always managed to self-correct with some “tactical placement & rotation” Conditions during the review were very windy which contributes to uneven burning. As the third progressed the toast and white pepper started to dominate the more subtle flavours of the cigar.

Moving into the second third saw the Toast transition into more of a bready flavour and get mouldy, coupled with the white pepper and a further increase in dominance the general feel of this cigar was heading downhill fast. The overall flavour was a breaded mould with a spicy acridity, with every puff becoming less and less enjoyable.

The burn went wild with about 20mm of variance, even whilst executing my tactical rotation and placement…… not so smart anymore am I, a touchup was required.

The bread and pepper was now totally dominating this cigar, making for quite an unpleasant experience. As the second third progressed the burn continued to offend and require additional touchups

Mid third the cut I made started to clog and another cut was required, which opened up the draw perfectly. Unfortunately this did not change the delicious now burnt plastic, caustic flavours offered this stick. On close inspection these horrid flavours were exacerbated but he fact this cigar developed a tunnel at least 1 inch deep down from its burn line.

I elected to retire this stick moving into the third 3rd as I didn’t want to vandalise my palate any further with this now toxic cigar. 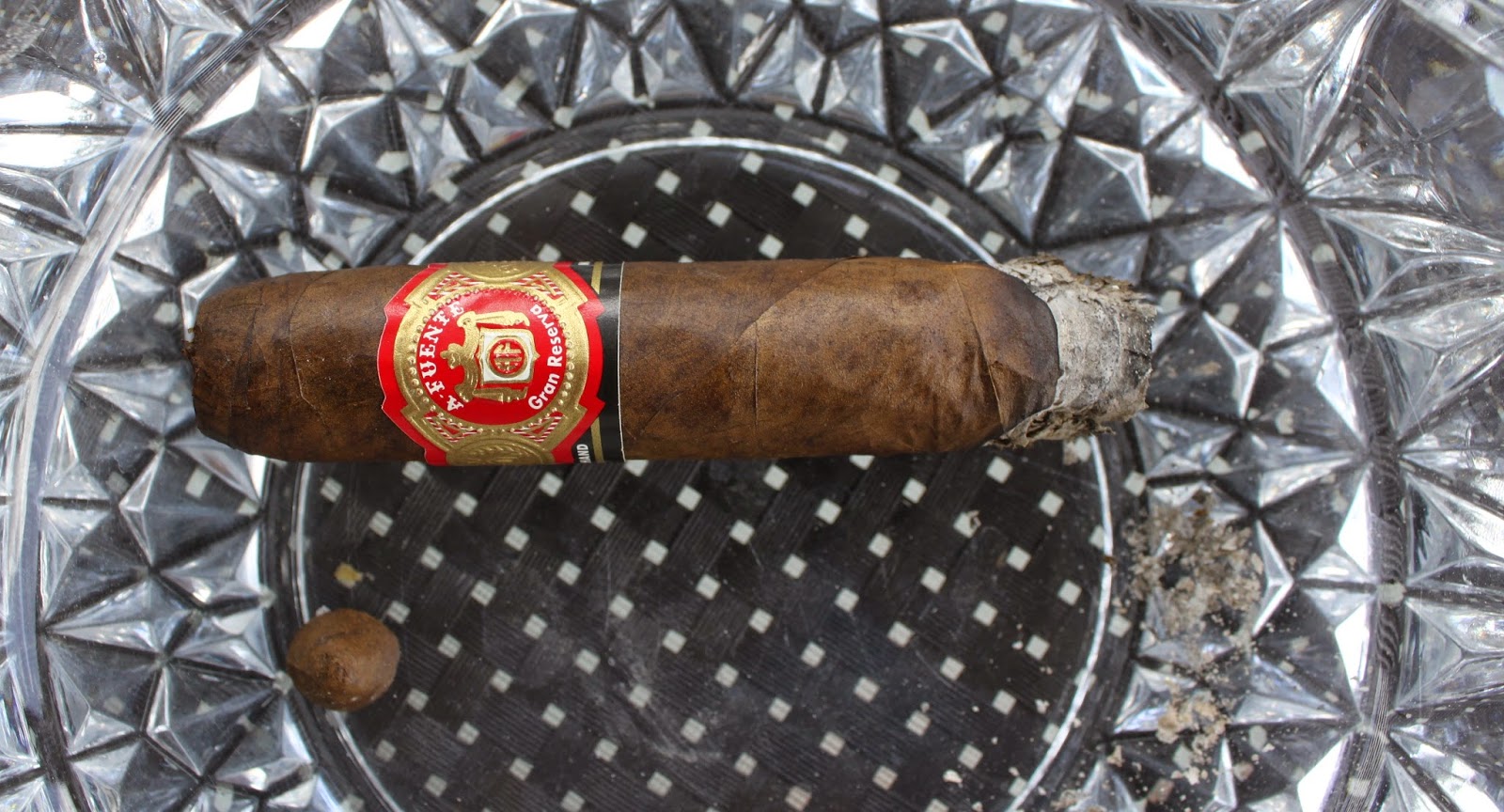 I’ve smoked 3 of these to date and they have all been reasonably similar to the first third with this one by far being the worst. Overall I was expecting significantly more from Arturo Fuente, on the whole I am quite disappointed.

Suggested pairing for this cigar would be a semi sweet Verdelho white wine.